By Michelle WearMarch 21, 2015Delran High, In the News, School Projects 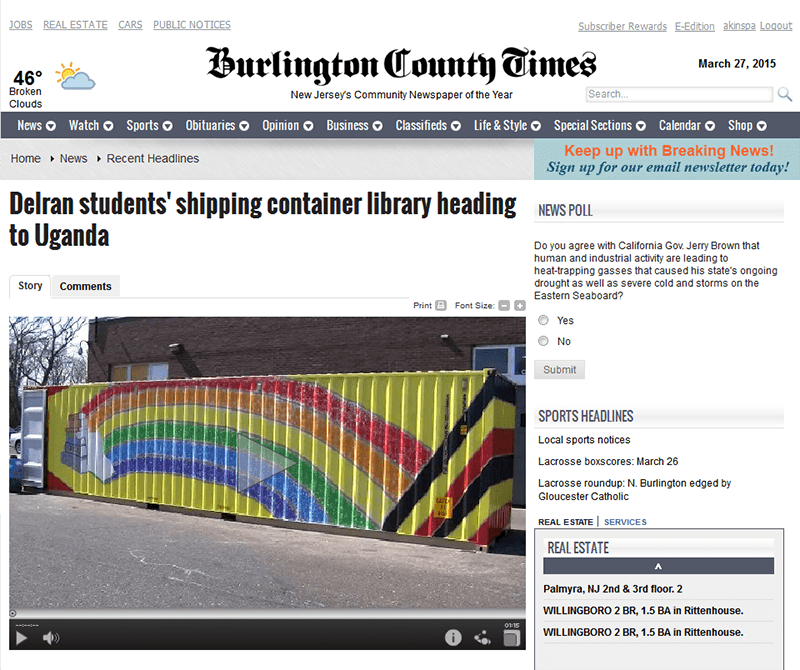 Nearly two years after a conversation about hope, a shipping container transformed into a library by district students soon will embark on a more than 7,000-mile journey to the war-torn African nation to serve as a place of learning for hundreds of youngsters.

The mission to transform container was sparked by a visit in September 2013 by Francis Nyang, who spoke of the ravaged infrastructure in his homeland after more than two decades of war.

Following a moving speech by Nyang, Delran High School partnered with Homes of Living Hope, a nonprofit that provides the framework for converting 40-foot-long shipping containers into functioning facilities.

For months, students, staff and volunteers spent numerous hours retrofitting the shipping container, donated by Seabox of Cinnaminson, into an educational facility for the African kids, according to Erica DeMichele, the district’s K-12 supervisor who helped organize the effort with teachers from the do-it-yourself, advanced art, engineering, industrial arts and art classes.

Even though the process took longer than expected, Miles said he’s proud of the students’ hard work over the last two school years.

“We went from the insulation to the framing to the drywall, mudding out the drywall, installing the electricity, building some furniture for inside, bookshelves, and then installing the floors,” he said. “There were so many components, but for us the process was the most important thing.”

After getting packed with more than 4,700 donated items, including 2,500 books, 33 buckets filled with educational supplies, bikes, balls, and lots of other items, including a playground from the nonprofit Kids Around the World, the library will be trucked to the Port of New York, to be shipped along with two containers from the Bridgewater-Raritan School District retrofitted to be a medical facility.

After stops at multiple ports along the way, and driven down rickety roads in Uganda, the library will arrive at its destination of Aloi in about June.

Student Trevor Parks said he believes the project was well worth all the time and effort.

“It feels nice to help other people who are not as fortunate as we are,” Trevor said.

Not only does the project fulfill a humanitarian mission, but Schreiner said she’s thrilled that it will encourage more reading a continent away.

“I just know how introducing them to it is the first step,” she said. “The fact that we can do this across the world for kids who need it so much and will get so much out of it is great.”

Homes of Living Hope’s mission is to meet the needs of others by packaging the efforts of the local community. By combining recycled shipping containers and volunteer labor, we deliver completed facilities to enrich peoples’ lives.